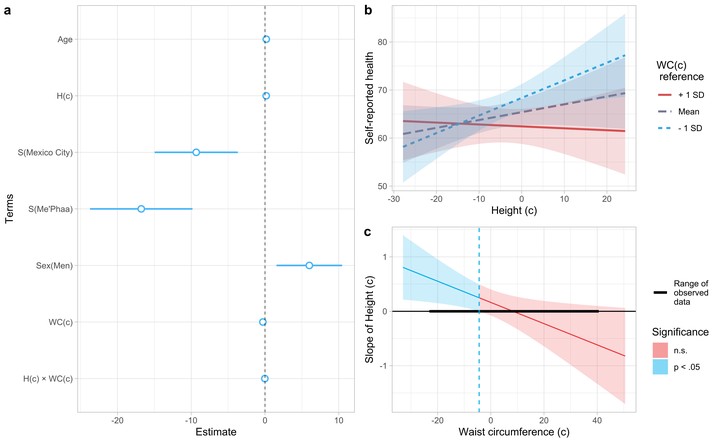 Body height is a life-history component. It involves important costs for its expression and maintenance, which may originate trade-offs on other costly components such as reproduction or immunity. Although previous evidence has supported the idea that human height could be a sexually selected trait, the explanatory mechanisms that underlie this selection are poorly understood. Despite extensive studies on the association between height and attractiveness, the role of immunity in linking this relation is scarcely studied, particularly in non-Western populations. Here, we tested whether human height is related to health measured by self-perception, and relevant nutritional and health anthropometric indicators in three Latin-American populations that widely differ in socioeconomic and ecological conditions: two urbanised populations from Bogota (Colombia) and Mexico City (Mexico), and one isolated indigenous population (Me’Phaa, Mexico). Results showed that self-reported health is best predicted by an interaction between height and waist circumference: the presumed benefits of being taller are waist-dependent, and affect taller people more than shorter individuals. If health and genetic quality cues play an important role in human mate-choice, and height and waist interact to signal health, its evolutionary consequences, including cognitive and behavioural effects, should be addressed in future research.

My research interests include mate choice and human vocal communication, with an aspiration towards understanding musicality. I am also interested in bioacoustics and psychoacoustics, as well as statistics and R programming.