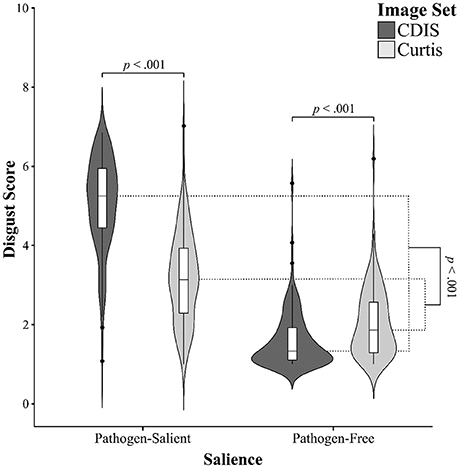 The emotion of disgust plays a key role in the behavioral immune system, a set of disease-avoidance processes constituting a frontline defense against pathogenic threats. In the context of growing research interest in disgust, as well as recognition of its role in several psychiatric disorders, there is need for an improved understanding of behavioral triggers of disgust and for adequate techniques to both induce disgust in experimental settings and to measure individual variability in disgust sensitivity. In this study, we sought to address these issues using a multi-stage, bottom-up approach that aimed first to determine the most widespread and effective elicitors of disgust across several cultures. Based on exploratory factor analysis of these triggers, revealing four main components of pathogen-related disgust, we then generated a novel visual stimulus set of 20 images depicting scenes of highly salient pathogen risk, along with paired control images that are visually comparable but lack the disgust trigger. We present a series of validation analyses comparing our new stimulus set (the Culpepper Disgust Image Set, C-DIS) with the most commonly used pre-existing set, a series of 7 images devised by Curtis et al. (2004). Disgust scores from participants who rated the two image sets were positively correlated, indicating cross-test concordance, but results also showed that our pathogen-salient images elicited higher levels of disgust and our control images elicited lower levels of disgust. These findings suggest that the novel image set is a useful and effective tool for use in future research, both in terms of priming disgust and for measuring individual differences in disgust sensitivity.